In spite of adversity and further attempts at deshumanization, chaos, death and barbarism with which Iraq suffers continuously, the Fifth Babylon Festival for International Cultures & Arts 2016 completed its first magic cycle of five integral years of success, still constructing a social, open-thinking, embracing-brigde for a peaceful future. Inshala!

This year »Babylon 5« warmly welcomed the famous Lebanese poet Chawki Bazih and his amazing poems; the Irish poet Niall McDevitt, a literary stroller, and an influential participant in the London and UK psychogeographical movement; the admirable Syrian poet Hassan Baiti coming from Homs, a prince of poets; the Arabic Iranian poet Abdul Al-Aziz Hummady and his imaginations; the wonderful British poet Agnes Meadows and her intense poetry of urban and fraternal experiences; the Turkish poet, narrator and translator Serdar Çelik and his nautical, wondering, mythical poems; the poet Juana Burghardt, born in Buenos Aires, and her marvellous Babylonian poem »City Woman«, one of the favourite texts; the Syrian poet Linda Abdulbaky and her shrewd verse recitation; the great poet Aqeel Alluwati from Oman and his poetical message; and all the Iraqi poets from the length and breadth of the wounded country, where poetry won‘t work as Vanity Fair, except for fundamental need like breathing freely.

»It was indeed a pleasure meeting all of you, and sincere thanks for your contribution towards normalcy by attending, we hope that you encourage others to follow your steps. Sincere thanks to Dr. Ali Al-Shalah also for his great input and all the participants! We hope to see you all next year! More fun, more civility, more music…«
Karim Wasfi

The motorway bridge piers at the centre of Al-Hillah are not yet finished, but even this Surrealistic Monument in its urban heart remains a creative and confusing theme of paintings by the astonishing artist Muayad Muhsin in his fantastic personal exhibition at the new Dar Babil Modern Gallery.

Diverse international brigdes grew deeper between Euphrates, Bosphorus, the River Plate and the Thames too; between Mesopotamia and Europe; between Babylon and the Iranian neighbours; and Iraq in the middle. This year international poets, writers, musicians, artists, film-makers and scientists came to Babylon from Syria, Oman, the Lebanon, Iran, Brazil, Argentina, USA, UK, Ireland, Turkey, Germany.

There was a colourful performance by the Hussein Al-Darwish Ensemble and six plays; some about the critical situation of human beings, »The Strongest« of the Swedish dramatist August Strindberg (performed in English), and refering to Iraqi realities such as the tragic Falludja experience with the famous actor Assad Mashai or the use of symbolism of the half open/half closed door; a dilema for the young Iraqi generation: Will it be really the next lost generation in their torn homeland?

They listened to the great Babylonian poet Muwafak Mohammed; the sensitive compositions of the heroic cellist Karim Wasfi, principal conductor of the Iraqi National Symphony Orchestra, played by himself; the enchanting Guitar-Oud-Duo with Ignacio Lusardi Monteverde and Ahmed Muhktar, playing Al-Andalus variations; Iranian heritage various music by Ishtar Band, among others. They watched several short & two feature films in the nice heat of the night.

They heard more than 30 Iraqi poets from Al-Hillah, Baghdad, Najaf, Basra and other cities of the country. There were some interesting discussions about novels and short stories, drama and media freedom of expression; studies about Babylonian poetry in its original language, presented by Prof. Richard Dumbrill, who transcribed authentic documents of ancient poetry, for example the 125 lines Babylonian poem »Ištar’s Descent to the Netherworld« with the following beginning:

To the netherworld, land of n[o return],
Ištar, daughter of Sîn, [set] her mind.
The daughter of Sîn did set [her] mind
to the gloomy house, the seat of the ne[therworld]
to the house that none leaves who enters,
to the road whose journey has no return,
to the house whose entrants are bereft of light,
where dust is their sustenance, and clay their food.
They see no light and dwell in darkness,
they are clothed like birds in wings for garments,
and dust has gathered on the door and the bolt.
When Ištar reached the gate of the netherworld,
the said (these) words to the gatekeeper:
„O gatekeeper! Open your gate for me,
open your gate, that I may enter!
„If you do not open the gate, that I may enter,
I will break down the door, I will smash the bolt,
I will break down the frame, I will topple the doors.
I will break the …, I will te[ar off the kn]ob.

They drank much strong Iraqi chai with sugar or without, but sometimes qahwe (sweet or sour coffee), ate Iraqi chicken, delicous kebabs, potatoes and rice with herbs and onions, crispy banana desserts and other Sumerian delights. The Souq came again to the Babylon Festival with surprising carrot ice cream, handmade by charming Faez; but also the international poets & writers strolled along the beloved Souq, as usual, tasting Cuba ad hood, a popular Iraqi dish, or made flash poetry meetings at Teahouses. 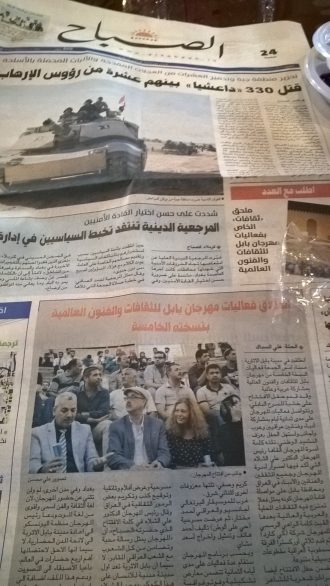 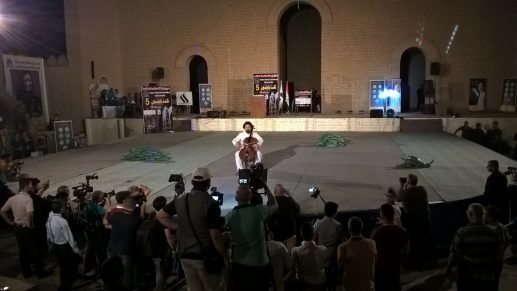 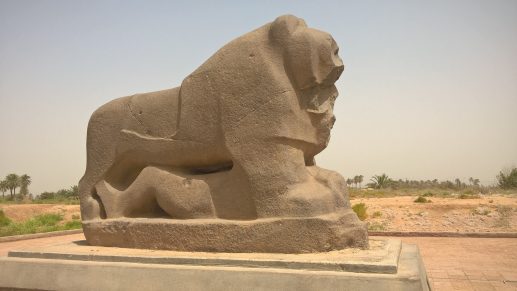 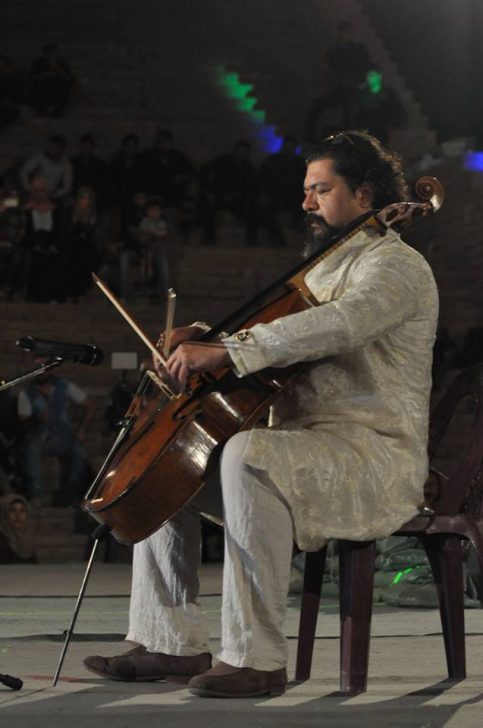 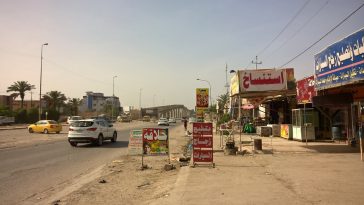 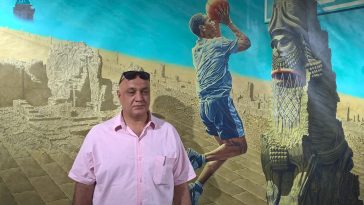 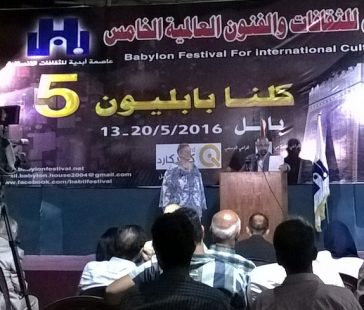 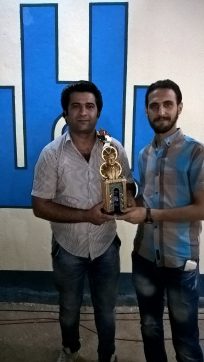 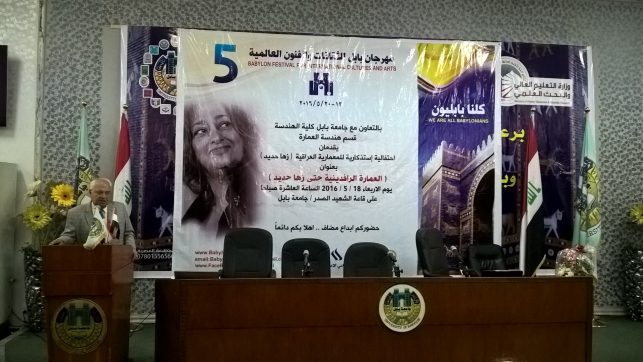 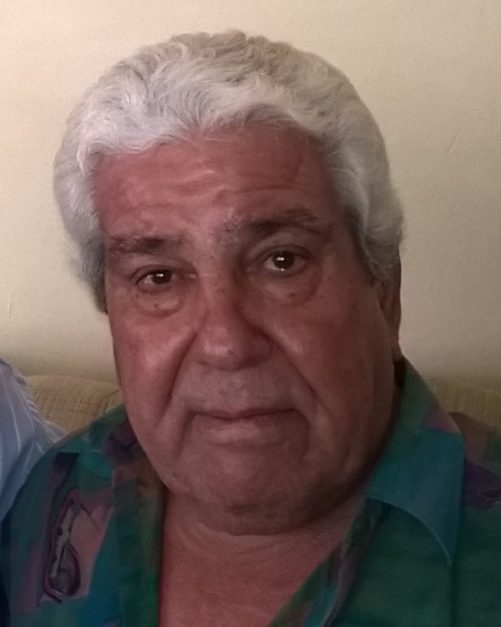 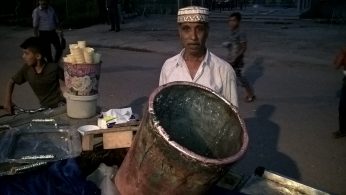 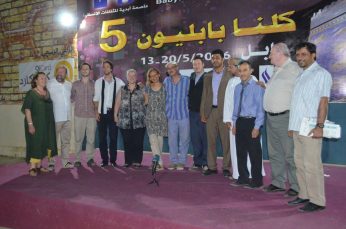 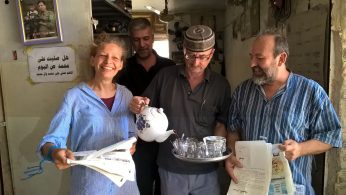 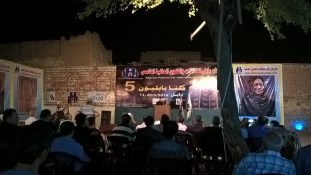 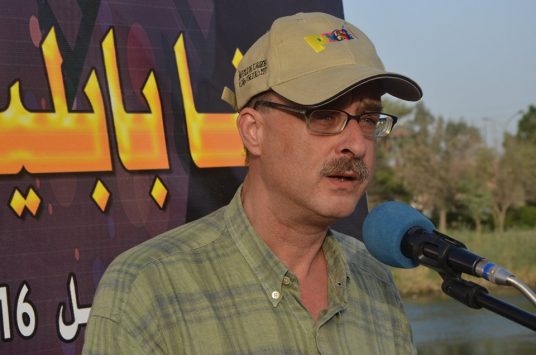 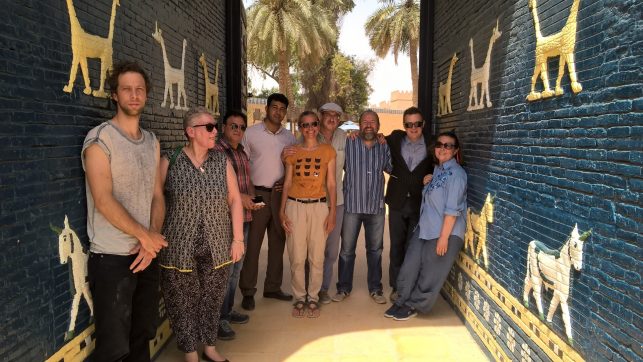 At the Ishtar Gate of Ancient Babylon. Foto: Babylon Festival 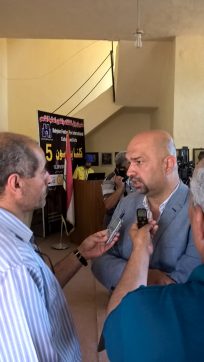 Shukran yazelan to the helping hands, ears and eyes: to all the workers at this amazing Babylon Festival; the volunteers; the sleepless organizers; the funny bus driver, indeed a good dancer and singer as well; to the most important Chaiyi, during eight festival days; the kind security team; the Al-Qahwayi; the rooms coordinator, a man with keys; the dedicated electric master, a chief of the cables; the busy photographers; the essential poetry and literature translators of Al-Hillah, Baghdad, London, Tanger, Ankara, Ajwaz, and more regions of just only one, but multilingual Babylonian world; to the festival newspaper colleagues; and, of course, the secretary of Dar Babil: a lot of warm thanks and more kisses to all the festival organization family, the lovely Maryam, Salah, Saif, Samer, Moutaz, Laith, Aseel, Abbass, Omran, Jihad, Jafeer, Muhanned, Rida, Haidar, Ahmed, Karrar, Hussein, Ali Ahmed & Ali Hamoodi, and many others. We’ve spend a marvellous time together in Babylon!

Poetry & Arts always struggle against emptyness and fear with many celebrations of friendship, such as an intimate emotional international poetry night reading close to the silent riverbank of Old Babylon, where the water flows from an indifferent past to an unknown future, and flows from »yesterdays of sorrow« (Agnes Meadows) to a renewed life, light and laughter of tomorrows; looking forward to the beautiful marriage of the promised couple; singing birthday melodies to the happy Tehran novelist Shahriar Abbasi; celebrating Hope, Beauty, Imagination, Tolerance & Dignity with various moods, patience & passion. Shukran yazelan, Habibi Babili!

A lone bottle floats down-river to the rhythm of the Euphrates. Inside there is a messag for the future of Iraq, not only the Irish poet Niall McDevitt knows so well since his last midnight ritual at the Ancient Babylon: #WE_ALL_ARE_BABYLONIANS – ‫#‏كلنا_بابليون‬‬‬‬‬.

»It was a great surprise and honour to attend the Babylon Festival. Thanks to all who made it possible. Our hotel on the outskirts of Hillah was called The Old Babylon Hotel. When I walked up the artificial hill nearby to the graffitied remains of Saddam’s Summer Palace, I couldn’t believe the view: it was the ruins of Babylon. We were actually staying where the legendary city had stood, the Euphrates flowing behind us. At the opening night, one of several distinguished artists on the bill was the cellist Karim Wasfi, famed for playing his instrument at bomb-sites. It was an inspiration to see him perform and to meet him. His example is that of the Babylon Festival itself, culture vs. barbarism. The poets, artists and musicians from Iraq, Lebanon, Syria, Oman, Turkey, Iran and beyond were all making this collective statement in the cradle of civilisation. Hence the fine phrase WE ARE ALL BABYLONIANS. It was great to encounter Serdar Çelik, Hassan Baiti, Linda Abdulbaky, and other poets. The dynamic Dr Ali Al-Shalah made everything happen and kept everyone safe, while the incredible warmth and intelligence of Tobias and Jona Burghardt tended to the needs of the poets‘ camp. Crucially, the friendliness and courtesy of the Iraqi people made us feel truly welcome. I wish the Republic of Iraq the very best of luck in throwing off its predators and saboteurs, to find peace and stability. I hope the festival goes from strength to strength and allows more visitors to behold the mystery of Babylon.«
Niall McDevitt

After coordinating and organizing during more than ten years with the Iraqi poet Ali Al-Shalah the »International Poetry Festival Al-Mutanabbi« at Zurich, we founded together, five years ago, the magnificent »Babylon Festival for International Cultures & Arts« at the cradle of urbanity, civilization, humankind. At Babil we started then the worldwide anthology »BABYLON INSPIRATIONS« with the invited international poets from all the continents and their newest poetic impressions & Babylonian poems in every language as word marks in the primordial Babylonian sense of the reality with innumerable faces and a respective very own voice.

An early evening sun gilds the unwrinkled jade water
Of Babil’s river as it slides by in silk smooth silence,
Its banks adorned with a kaleidoscopic frieze of
Marigolds and Jasmin flower. Close by, poets necklace
Words of fire and blood in scarlet threads, competing
With the voice of the muezzin as he fingers heaven.

Both speak of a God hidden beneath layers of sand
And avarice, while swallows swoop and plummet,
Snatching sequins of emerald water by the beak-full,
Before flickering, bat-like, away into the lowering dusk.

In a time of war, culture and poetry and music and theatre and exhibitions are needed as much as food, oxygen, water. 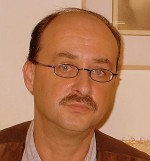